Wildcat Ranch, between I-20 and US 175 near Crandall, is planned to have 3100 homes on 900+ acres of land. The first homes there should be done late next year. 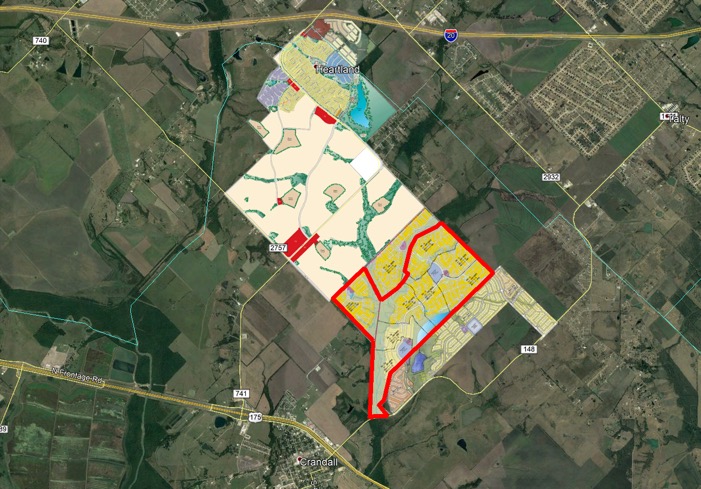 This looks like it's just outside the city limits of Crandall but will easily double the population of that small town overnight. Took 100 plus years to get to 3,000 residents and boom, 3000 new homes.
Top

I actually had to look up where Crandall was on a map... lol
While I'm not typically a fan of these master planned SFR communities... It is good to see it happening south for a change. It would be good to get some growth down that way.
"He doesn't know how to use the three seashells..."
Top

The price point is right and is definitely a good option for people looking for new homes. There is a lot of land out there in play. Between Kaufman, Terrell and now Crandall there is much going on and Terrell is obviously seeing it's share of new projects. They opened up a new apartment community out there last year and someone out there told me it was the first new apartment community build in Terrell since the 1980's.
Top

muncien wrote:I actually had to look up where Crandall was on a map...

haha totally, like, the name is familiar enough, but on a map I couldn't have told you!

Curious whether or not Kaufman County decision makers are still working on commuter rail into the city. I think tentative plans even had trains from Texarkana and Tyler running through Kaufman County on the way to the city....
Top

The Crossroads at Terrell

DALLAS – August 15, 2018 – On behalf of RealtyLink and Oakridge Investments, CBRE announces an initial slate of tenants for the Crossroads at Terrell, a 190,000-square-foot retail development at the northwest corner of Interstate 20 and FM 148.

The Crossroads at Terrell is a 255-acre master-planned regional retail and mixed-used development servicing the eastern side of DFW and the greater East Texas area and is located adjacent to North Texas’s first Buc-ee’s Travel Center and a 52-acre future Baylor Scott & White Health medical campus.

A number of national retailers have executed transactions and are slated to open in Spring 2019, including:

These new tenants will join Film Alley Movie Entertainment Center, a 74,000-square-foot movie theatre, bowling alley, and entertainment facility which is under construction and scheduled to open in 2019.

“Texas is a growing market that RealtyLink has been looking to get into for some time,” said Phil Wilson with RealtyLink. “With Dallas-Fort Worth adding well over 100,000 residents per year over the last several years, The Crossroads at Terrell is a great place to start. The development is located in a dynamic regional trade area with a population of more than 230,000 that serves all of Kaufman and Van Zandt counties, making it a primary retail development and commercial hub for the entire region. Kaufman County is the fourth fastest growing county in Texas and the fastest growing county in North Texas. We are excited to get started on construction immediately.”

Andrew Lehner with CBRE in Dallas is marketing the project on behalf of RealtyLink. Shop space, restaurant space, and pad sites are still available.

I wondered when this project would get going. It's been talked about for years now.
Top
Post Reply
7 posts • Page 1 of 1

Users browsing this forum: No registered users and 8 guests