A planned development on the SW (the article says southeast, incorrectly) corner of US 75/TX 121, was previously due to be 'Allentowne', a mall-based development that failed in the wake of the bankruptcy of General Growth, the developer. Previous to that, it was the site of Belz Outlet Mall, a project way ahead of its time and not easily accessible at the time. It eventually closed and was torn down. The site spans 240 acres and developers plan office, hotel, retail, and apartments there. No timeline is mentioned as to when any part of the development will be completed.

Another development name that could be seen as awkward or questionable, the article says Monarch City is named for the type of butterfly. Supposedly the area was at one time a favorite for the insect, according to the article.

Looks great and all, but how many of these can the suburbs support?
Top

I hope this isn't another Wade Park. We need lots and lots more companies to move here if all the office-based developments are gonna get built and make it here.
Top

DPatel304 wrote:Looks great and all, but how many of these can the suburbs support?

That was my question when I saw this earlier. It looks ambitious and doesn't McKinney have something planned as well? Looks like a ton of office product.
Top

Why do I visualize a butterfly museum when I see that name?
https://www.instagram.com/southdallas40/
Top

I just wish this was closer to Watters Creek, which I consider to be the 'best' suburban mixed use site in DFW, especially since it isn't bisected by a huge arterial like Legacy is. This is the problem with highway-adjacent developments. The cities act like it's a limited resource but it's essentially unlimited and none of them are all that close to one another so there is no synergy.
Top

texasstar wrote:Why do I visualize a butterfly museum when I see that name?

How about a town inhabited only by 17th century European royalty?
Top 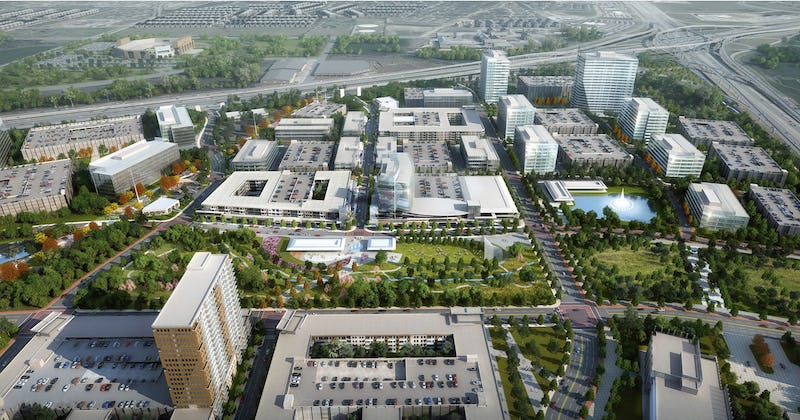 The city has given the go-ahead for Monarch City to commence construction. The mixed-use project, 261 acres in size, will eventually have 10 million square feet of retail, residential, hotel, and office space.

This is an amazing proposal.

I don’t mean to rain on the parade, but that intersection is so bad already with traffic. How in the world will they add more?
Top

Users browsing this forum: No registered users and 1 guest