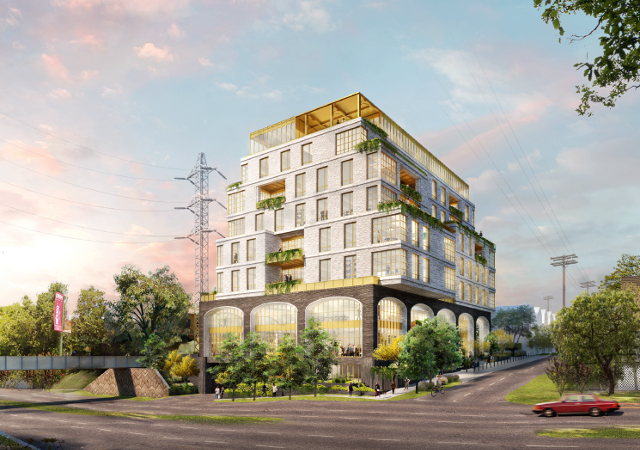 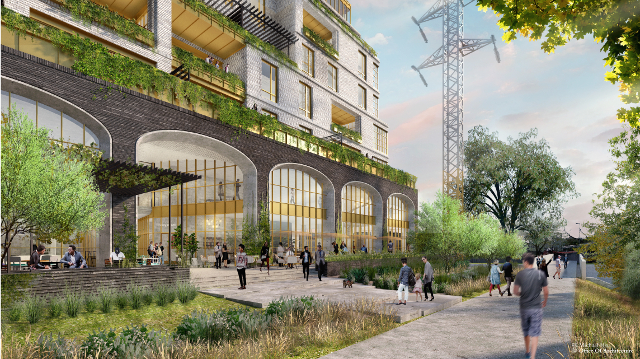 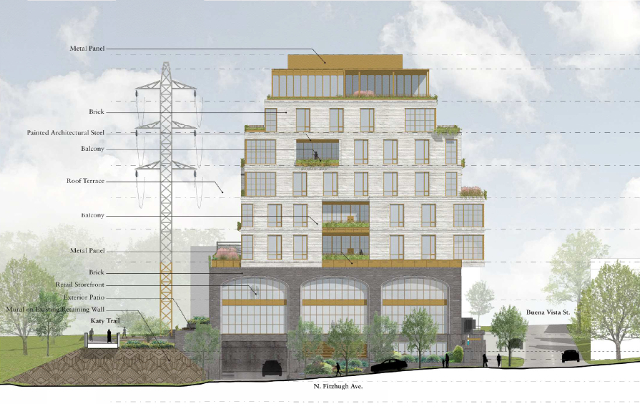 The Terminal – 4205 Buena Vista Street at Fitzhugh and Katy Trail

Replacing an orange stucco low-rise, The Terminal would be a vast improvement. The proposed building is designed to house 25 for sale condos, averaging 2,500 square feet, on the upper five floors with various eateries and offices below. The “Terminal” name and imagery are meant to evoke a train terminal, paying homage to the Katy Trail’s roots as a train line. The first two stories have a train terminal reminiscence with oversized arched windows and dark brick. The glass will surely make working or eating in these spaces light-filled with excellent views of the Katy (and scantily clad summertime joggers).

What’s also cool about these lower two floors is the publicly accessible cut through from the street to the Katy Trail. It not only enables access, but also grounds the building with the trail. Of course, with eateries and watering holes (the developer packet lists “chia pudding” among other delicacies – whatever that is), Regardless of the menu, I’m sure the beckoning is meant to encourage Katy Trail patrons to jog with more money.

Not all is rosy, there’s a pinch of odd. It took me a while to figure out why a portion of the building’s front stuck out (right). It makes the whole building look like it’s been jostled off its base a little. The reason is that the building has to bend out of the way of the huge electrical tower at left. The needed cantilever effects that part of the building from front to back.

I figure there’s little choice in order to get the interiors to work best and not electrocute residents, but it’s still an oddity to the eye that’s made more noticeable by the change in brick color. The bump out reduces some setbacks above 36 feet (part of the developer asks).

Speaking of developer asks, aside from one tree fewer on the Fitzhugh and Buena Vista elevations, they’re asking for 3.6-to-1 FAR instead of 2.5-to-1. But the added FAR equates to a taller building (that’s still below zoned height) so they can drop the lot coverage from the zoned 80 percent to the proposed 62.5 percent. This should make the connectivity with the Katy that much stronger (as if the chia pudding needed help – ha!).

Note three to Victory Park – all parking, valet, trash and loading will be underground.

What a lovely little project. I'm glad to see a new for-sale condo option in an area with a strong history of condo ownership, rather than Downtown/Victory Park where condos are a new thing. The design is lovely too. I used to own a condo right up the street from this on Buena Vista and it's a wonderful area.
Top

Wow, this one looks incredible! I know many people are all about keeping the trail as a trail, but, honestly, I like seeing more development occurring on the trail.

I agree, the Beauna Vista area is lovely, and in a great location right between Knox and Uptown. I'm guessing we'll see a lot more development along Fitzhugh in the near future, and this particular development is really setting the bar high to start with.
Top

Yes! That lot was such a waste, an exciting design albeit a bit quirky
Top

Great! Will be interesting to see how much the HP side of the Trail complains about another "high rise" on the Dallas side. There's no official entrance there for the trail either so this would be a great add.
Top

That looks cool, but I'll be interested to see how the expensive condos right next to the high voltage transmission line sell.
Top

CRE_Investor wrote:That looks cool, but I'll be interested to see how the expensive condos right next to the high voltage transmission line sell.

There's only one big "post" along the property and that's right by Fitzhugh. Yes, there will be lines nearby but let's be honest, Dallas is filled with power lines in both rich and poor areas.
Top

That looks pretty awesome. I like the train terminal inspiration for the bottom floor. I'll temper expectations on all the hanging greenery, but I really like the color scheme of the building.
Top

I like it! Nice, if quirky, addition to the neighborhood. Really like the big windows. Happy to see retail incorporated as it was not included in Aura on McKinney two blocks east. Fitzhugh needs an update and this will help a lot.

The base reminds me of the look of the power station 3 blocks north on Buena Vista which was converted to a home years ago. First look at drawings, I was disappointed to see Katy Trail access was eliminated, but reading the story, it’s just going to be moved slightly north. Condos!! We’ve got enough LUXURY apartments in the hood to last a while.
Top

The arches do look out of scale with the site in my first look at it but I do like the train station inspiration. I do enjoy the plan to be a real connection to the trail with retail/office space while still providing for sale housing. Now the redo of the shopping center that housed BJs NXS and a few other small businesses looks like a steal.
Top

flyswatter wrote:Great! Will be interesting to see how much the HP side of the Trail complains about another "high rise" on the Dallas side. There's no official entrance there for the trail either so this would be a great add.

Don't think HP will have much to say on this one, Dallas is on both sides of the trail here for a couple of blocks.
Top

Oops you're right, my bad. Forgot that it was closer to Turtle Creek over there.
Top

Don't worry HP will still declare its an observation tower built to peer into their living rooms. The Park Cities are always the victims in most stories that involve them and the city of Dallas.
Top

When is this going to start ?
Top

Fingers crossed this project becomes an entity of going concern - love it!
Top

This is a rendering of the remodel of the old strip center across Fitzhugh from The Terminal (south side of Fitzhugh between Cole and Travis). I found it a litte too late, as the center pretty much looks like this now. The center appears ready for interior finish out. The western-most space does appear poised to become a restaurant of some sort. Need to walk over and see if there are any permits in the window.
You do not have the required permissions to view the files attached to this post.
Top

There is a big "Arriving" sign for The Terminal on the property now.
Top

beepboopdtown wrote:There is a big "Arriving" sign for The Terminal on the property now.

Nice!! I always worry about the high quality developments like this getting killed before I see dirt turn.
Top

beepboopdtown wrote:There is a big "Arriving" sign for The Terminal on the property now.

Nice!! I always worry about the high quality developments like this getting killed before I see dirt turn.

From what I understand they just got their approval! I couldn't be more happy for them. It's a great team there.
Top

All I can think of when I see the renderings of this is the scene in Tommy Boy, “Did you live under power lines as a kid?”
Top

The condos have hit the MLS averaging at just over $1000 per square foot. Is this a new record for condos in Dallas? I think Museum Towers listings are around $850/square foot right now.

The units look gorgeous and well thought out. Not bare like Museum Tower:
https://www.realtor.com/realestateandho ... 06?view=qv
Top

19 units starting at $2.5mm. You have to assume the starting price units are this with direct views of the power lines. This better be VERY swanky. The gold toned metals in the renderings must be gold plate!
Top

I wonder if this will affect the Fitzhugh Westbound access to the trail. Allot of people enter/exit there.
Top

The price point is insane, but I'll take condos (even at that price) over more 'luxury' rentals. We definitely need more homeowners in the area, although, obviously, I'd prefer more moderately priced housing.
Top

Urbandreamer wrote:I wonder if this will affect the Fitzhugh Westbound access to the trail. Allot of people enter/exit there.

My understanding is this will add a pass-through area so people can easily move back and forth. I know a lot of trail users like to go to that 7-Eleven so it was a logical need as part of the project.
Top

Urbandreamer wrote:I wonder if this will affect the Fitzhugh Westbound access to the trail. Allot of people enter/exit there.

There's a giant pass through, the middle of the lower part of the building is hollow, meaning people can now walk from Buena Vista Street straight through to the trail, instead of scaling the dirt path that exists now.
Top
Post Reply
28 posts • Page 1 of 1

Users browsing this forum: No registered users and 14 guests